WITH the last of the post-war generations turning 50, analyst IBIS World says the upcoming retirement of baby boomers will make a big impact over the next few years.

The property market, travel industry, retirement housing and financial advice would be the sectors to get the biggest boost, IBIS World said.

In WA, baby boomers make up 21 per cent of population, according to the group’s research.

This demographic moving to better locations, downsizing or upgrading over the next few years will generate plenty of sales activity in the property market, IBIS World research analyst Ryan Kerin said. Other property experts said the massive demographic shift would also change the face of inner-city and “middle ring” suburbs and create more demand in lifestyle locations.

The director of Metropole Property Strategists said he agreed Australia was on the crest of a “demographic tsunami”, but didn’t think boomers would sell their homes immediately upon retirement. Many would also want to remain in their same suburbs, close to friends and family.

“Those who do sell up will want to downsize to modern accommodation (much of it which is yet to be built) and won’t have difficulty finding buyers for their properties as developers will snap up their ageing properties to build duplexes and apartments to house the growing population in our middle-ring suburbs,” Mr Yardney said.

Population growth from immigration would maintain demand for boomers’ homes.

Big suburban houses on the city’s outskirts wouldn’t do as well, Mr Collins said. He said there would be an increasing number of apartment developments marketed directly to downsizers, with prices ranging from $600,000 to $1m.

“There was a development recently where 70 per cent went to downsizers,” Mr Collins said. 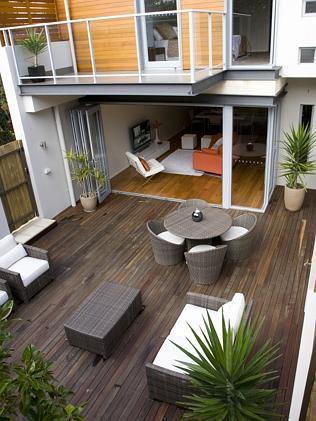 Mr Hegney said the bigger blocks in middle-ring and inner-city suburbs would also be popular with developers.

“There won’t be tumbleweeds blowing down the streets of the baby boomer suburbs,” Mr Hegney said.

“There will be an increase in density in some areas.

“With more people, the local shops will be busier. That introduces more opportunities for local business, for example, local cafes.

“The areas will change from older-fashioned dwellings to more modern dwellings.” Mr Hegney said while boomers’ homes might only be 40 years old, they would generally become highly sought-after for their land value.

He agreed smaller homes would be in demand, but said there was still some resistance to apartments from baby boomers.

“We have seen some baby boomers buy smaller apartments then bounce back into bigger properties when they realise they want a place for the grandkids to stay, or a backyard for them to play in,” he said.

IBIS World’s Mr Kerin also said those who downsized wouldn’t necessarily buy cheaper homes, as it could jeopardise their pension.