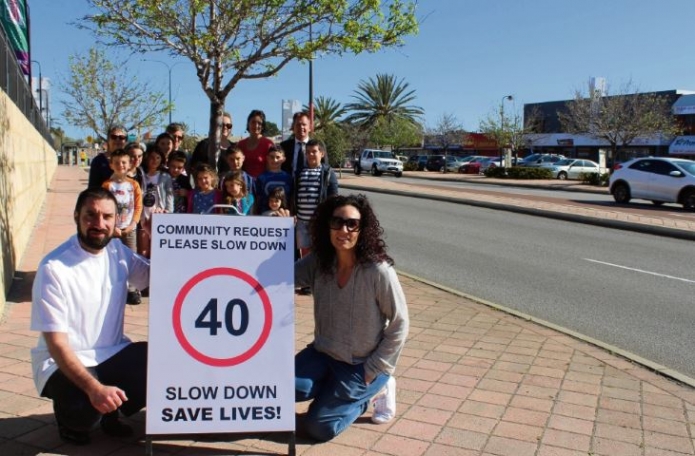 A GROUP of Tuart Hill and Osborne Park residents are taking the Main Street speed limit into their own hands.

The Main Street Co-op, a community organisation pushing to revitalise the street, has made two 40km/h signs they will be placing on the street to push Main Roads WA and the City of Stirling to extend a 40km/h trial.

Chair Tania Pietracatella said the group was circulating a petition to extend the current trial from Cape Street to include Eldorado Street.

“It is supposedly our town square and we can’t walk down here,” she said.

“Apart from the safety issue, I think people need to understand our vision for a large piazza where young and old can head down to sit under a tree and meet and chat in a safe environment.

“There are so many other things we want to bring to our town square but it won’t be possible unless we get this traffic slowed down and make it a safe place for the community.”

“Slowing one half won’t make any difference – we’re only talking 300m – it needs to include the whole area,” he said.

“Everyday we hear breaks screeching out the front of the pharmacy and everyone holds their breath waiting for the bang.”

Balcatta MLA Chris Hatton said he had written to Main Roads and the City about safety and speeding issues on Main Street and was prepared to face consequences of the new signs.

“The State Government and Department of Transport, they don’t like this stuff because they already have their speed limits out there; me standing here with (the sign), I don’t know if I’ll get a reaction but I’m passionate enough to see what happens because I think it needs to be done,” he said.

“For anyone to take it upon themselves to tell people to slow down is contravening Main Roads policy; for me to stand here, I might get a phone call.”

Mr Hatton said Main Roads was hesitant to extend the speed limit trial to Eldorado Street because the shops were set further back from the road.

“Foot traffic is the thing but safe foot traffic; if people are scared to come down here because cars are rushing through with the main arterial road then we lose that ability to get people walking because of road safety,” he said.

“Like Oxford Street Leederville, like Beaufort Street Mt Lawley, this needs foot traffic to get the businesses thriving and get that vibrancy here.”

The trial, including flashing street signs and an independent review, will cost the City up to $50,000 and be implemented as early as February next year.

According to Main Roads WA data, almost 70 crashes occurred in the area between Cape Street and Royal Street in 2014 and 2015, with 61 properties damaged as a result. Eight people needed medical attention due to crashes.