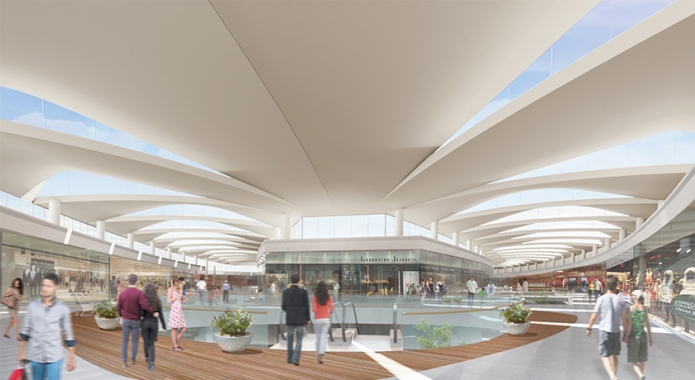 A raft of major shopping centre expansions could soon redefine how Perth shops as the second half of the decade shapes up to be the redevelopment and expansion era for major retail centres.

Centre owners AMP Capital, Vicinity Centres, Perron Group and Scentre Group have all released plans adding up into the billions, with more floor area, new international retailers and a focus on community space.

What’s happening at the shopping centre near you?

The addition of apartments is part of the shopping centre redevelopment at Karrinyup. Image: Supplied

The redevelopment will almost double the centres size 59,715 square metres to 113,000 square metres and include a large piazza, corso and main street.

Brookfield Multiplex will build the new centre estimating the redevelopment will create 2500 jobs while under construction and then 2500 in retail sales, support and management.

AMP Capital and Brookfield Multiplex are finalising design development and project staging details over the coming months before announcing a start and completion date.

Two new supermarkets will be included in the Garden City project. Image: Supplied

While it seems like only yesterday Garden City Shopping Centre got a new look and attracted international brands like Zara, AMP Capital Diversified Property Fund won’t be stopping there.

Last year it announced it would spend $750 million on a revamp of the Booragoon mall, gaining approval later in the year.

The centre will increase from 72,000 square metres to 120,000 square metres and is expected to include expanded and refurbished department stores, two new full-line supermarkets, large-format international fast fashion retailers and flagship stores, an additional discount department store, a main street casual dining and leisure precinct, a new cinema complex and an assortment of fresh food offerings.

Depending on approvals, construction is expected to start late next year.

An artist’s impression of the upgrade to the Galleria shopping centre, Perth. Image: Supplied

Galleria might return to its heyday as one of the city’s best shopping centres with a $350 million redevelopment.

A development application was lodged by Perron Group and Vicinity Centres last month to more than double the retail floor space at the Morley complex.

A stage two development, slated for beyond 2031, will see the floor space more than tripled.

An artist’s impression of the upgrade to Carousel shopping centre, Perth. Image: Supplied

Westfield Carousel received approval last year for a $235 million expansion that will see the Cannington centre grow to 130,300 square metres.

Included in the plans was a childcare centre, a health centre, office space, cafes and restaurants. The approval will allow the centre to expand and increase its retail space by 50 per cent.

The application includes plans to incorporate some significant enhancements, including the development of a town square with playgrounds, public facilities and an enhanced entertainment precinct around the cinema complex area.

Work is expected to start in the first quarter of next year with completion mid-2018.

An artist’s impression of the upgrade to Innaloo shopping centre, Perth. Image: Supplied

Westfield Innaloo will no longer be the poor cousin with development application approved for a town centre surrounded by street-front shops, double-height retail and a roof-top entertainment precinct.

The $450 million overhaul will nearly double the size of the existing Innaloo centre to 99,000 square metres.

Work is expected to start mid next year with completion late 2018. Owner Scentre Group said construction would create 1900 jobs as well as 1250 permanent jobs once completed.

The construction crews are already busy at Westfield Whitford City undertaking stage one redevelopment to create a new casual dining and entertainment precinct. Work is expected to be finished by the end of next year.

Moving south, Mandurah Forum is in the throes of a $350 million revitalisation with a new David Jones and Target, a new family-friendly cafe and restaurant precinct to nearly double its size.

Construction has started and is expected to be completed early-2018.

Owner Vicinity Centres has also been busy nearby with $54 million being spent on Halls Head Central the $39.4 million redevelopment of Warnbro Central.