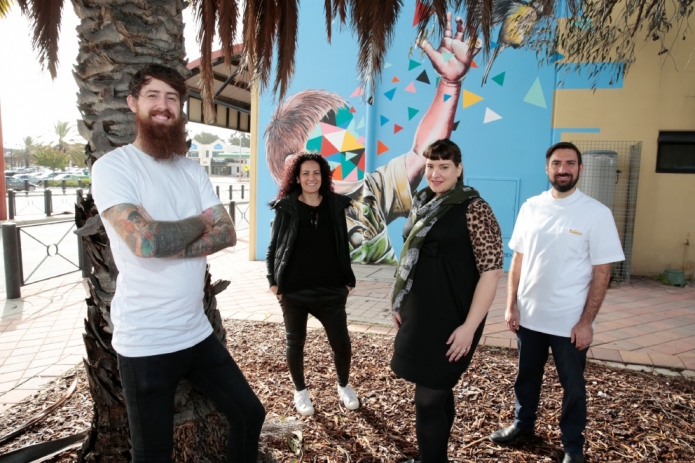 OSBORNE Park’s Main Street could soon be the new Beaufort Street, according to a group that wants to bring vibrancy and life to the area.

Main Street Co-op, a recently formed group, organised two murals on the street and hopes to work with businesses, residents and the City of Stirling to improve the atmosphere.

“I remember Beaufort Street a few years ago – there used to be car yards and not many pedestrians at all and it just changed. It felt like overnight but it took a couple of years,” she said.

“I think if we make it a safer place and nicer to look at we’d probably attract some small bars, cafes, wine bars and a bit more night life would be great because there isn’t much of that at the moment.

“Eventually we’d love to have festivals down here; we’ve got the room.”

Ms Pietracatella said the murals were just the beginning of a Main Street re-vamp.

“When spring comes we are intending to get all the businesses together to do a big clean-up because it needs a massive clean-up and maybe at the end of the day have some food vans and a DJ,” she said.

Main Street pharmacist and Main Street Co-op co-chairperson Louis Anastasas said calming the traffic was the key to encouraging people to the area.

“I’ve been on Main Street for 14 years and it’s a great community, but I think we can take it to another level; it’s very exciting,” he said.

“There are a lot of people who want to get involved.

“We’d love to be able to slow down the traffic and make it a more welcoming environment because at the moment young families don’t really feel attracted to the area because it’s not safe.”

With a background in co-ordinating public art projects for the City of Vincent, Tuart Hill resident Yvette Coyne said the mural was a “quick win” for the community.

“It’s really about getting people to linger longer in the area and just give the place a bit of a facelift,” she said.

“Tuart Hill is an area that people can afford to buy their first home and I see a lot of young couples and young families here.

“It’s not really a pedestrian-friendly place and not many people would want to linger here.”

Artist Brenton See, who painted ‘Let Your Colours Show’ over two days, said the piece was inspired by the spontaneity of childhood.

“A lot of kids embrace animals and bright colours and we lose that as adults. It is about tying people back to their younger years, about the simple things in life and the colourful world that we all once saw,” he said.

“It’s great to be able to brighten up the area; this wall had been graffitied before and it’s a wall that people constantly drive past and see.”

To get involved visit www.facebook.com/Main-Street-Co-op.