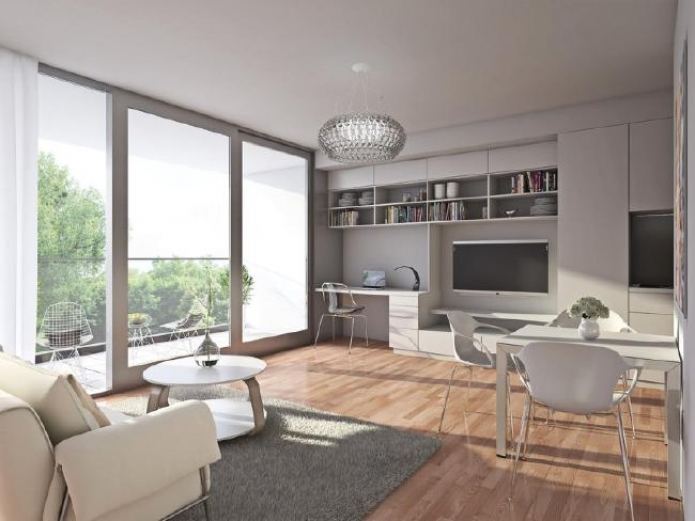 APARTMENTS of 40sq m or less are set to become a common fixture in Perth as the drive for affordable living continues.

New data from the Australian Property Institute shows more than 200 apartments under 50sq m were sold in the past 12 months, with 50 of those in the Perth CBD.

And while micro-apartments have been few and far between in the past, approval is being sought at developments in Northbridge, Fremantle and Perth for apartments of 40sq m or less, with the Zen apartments on Newcastle St already getting approval for 33sq m units.

Micro-apartments have one room (also known as a studio) and are smaller than 50sq m.

It comes as the average apartment size in new developments in the city has dropped from 144sq m in 2012 to 70 sq m this year, according to API figures.

Colliers International head of residential sales Daniel Crotty said analysis of more than 3100 units built and planned for Perth showed one-bedroom apartments now make up about a quarter of supply.

Mr Crotty said there was clear demand for smaller apartments, but the sizes did put Perth at odds with new regulations in Sydney that for the first time require minimum standards for all apartment sizes.

“In Perth, we have recommended sizes for apartments, but they are not mandated in the same way.”

Mark Hay Realty director Mark Hay is selling a number of off-the-plan and established micro-apartments and said the tiny units were largely being bought by investors and young professionals.

“We’ll definitely see them continue to grow in 2016 as buyers continue to choose location over the size of a home,” Mr Hay said.

“In London, 30sq m is a palace and there has been some innovative ways of living in units as small as 17sq m.

“That’s starting to take off here and we’re seeing studios with pull-down beds and the like, to save on space.

“Some apartments are now being designed without ovens and only microwaves to accommodate for the young person who wants to eat out.”

“They seem to want something that they can obviously afford that won’t affect their lifestyle,” she said.

“They don’t want to be burdened with massive repayments. Some also look at being able to keep it as an investment once they move into their next purchase, like the family home.”

HER apartment might be less than 40sq m, but Sara Ninkovich says good things come in small packages.

The first-homebuyer picked up the 39sq m studio apartment in Mount Lawley for under $250,000 earlier this year, less than a quarter of the area’s $1.05 million median house price.

And the 24-year-old fly-in, fly-out worker said that when it came to buying property, bagging a bargain trumped floor space.

“I love it,” she said. “I wasn’t specifically looking for a studio or small apartment, but found this place and thought it was a great opportunity.

“In Europe, everyone lives in an apartment, so I thought, ‘why not here?’. Why do I need a backyard? Maybe for my next house, but when I’m young and working away, I want something I can feel safe about locking and leaving.”

Ms Ninkovich renovated the apartment to maximise space with an open-plan kitchen, L-shaped couch and use of light colours to make the apartment appear bigger.

She also uses a divider to separate the living spaces and extensively “decluttered” before moving in.

“I just don’t keep things I don’t need,” she said. “If you have a dress from when you were 17 that you’re never going to wear again, throw it.”

She said the apartment’s central location and low maintenance helped inspire the purchase.