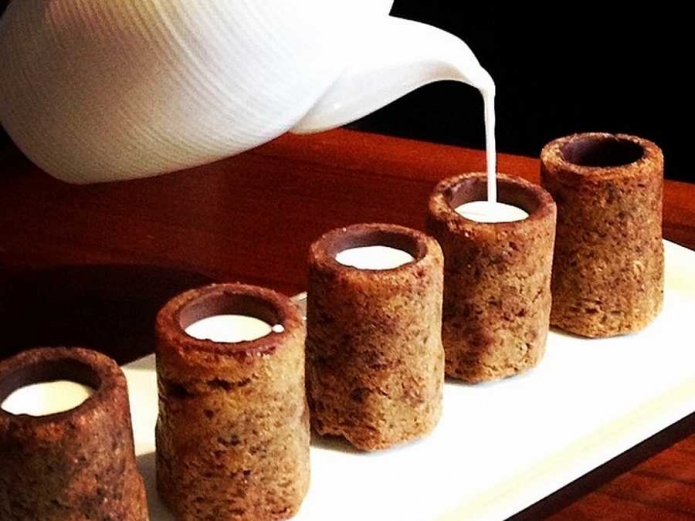 If Dominique Ansel builds it, they will come.

A line stretching almost two city blocks has formed outside the InterContinental Stephen F. Austin Hotel in Downtown Austin, Texas. It’s almost midnight, but some of these dedicated fanboys and fangirls have been mulling about since as early as 9 p.m. Amid a plethora of options at South By Southwest (SXSW), from movie premieres to music showcases to tech parties, they’ve chosen to wait in line for hours to get the first stab at a pastry that may be all the rage in the weeks to come.

They’re here for the official unveiling of the “Milk & Cookie Shot”—the latest divine creation from innovative French pastry chef Ansel, he of Cronut fame. It is, quite literally, an eatable chocolate chip cookie shot glass filled with milk.

The product is being unveiled at a SXSW event dubbed “Midnight Late Night Saloon Party with Dominique Ansel,” and presented by Allison + Partners.

And the “Milk & Cookie Shot,” sometimes referred to as the “chocolate chip cookie shot,” is a unique spin on a time-worn classic.

“We use a few ounces of organic, fresh farm milk for the milk infused with a vanilla inside—so it’s slightly scented with vanilla,” Ansel tells The Daily Beast. “For the cookie, it’s a very light, aerated cookie dough much lighter than the traditional one. Inside of the cookie cup, we have a very thin coat of dark chocolate that holds the milk in and avoids it from contacting the cookie dough, so it doesn’t get soggy at all.”

If you eat it the Ansel-recommended way (as I did), following each bite of the cookie glass with a sip of milk, you get the richness andthe palate-cleanser.

Ansel hatched the idea for the milk and cookie mélange when he learned, not too long ago, that in America people drink milk while eating cookies—a modus operandi that’s not too common in his native France.

“I found it really interesting and wanted to find a way to make it playful, elegant, and fun—a way for people to eat and drink at the same time,” he says.

For the Cronut, Ansel recommends cutting the pastry in half “so you can see all the layers,” before peeling the layers one-by-one to enjoy the textures. As for the Milk & Cookie Shot, the preferred method of consumption, he says, is “sipping the milk from top to bottom and eating the cookie as you go along, so you get both.” Each Milk & Cookie Shot, which stands about 3.5 inches in height, takes “a good 15-20 minutes” to produce, according to Ansel.

I was one of the first to try Ansel’s latest and I’m happy to say that it doesn’t disappoint. The cookie is warm, yet firm, and coalesces perfectly with the milk and chocolate lining. If you eat it the Ansel-recommended way (as I did), following each bite of the cookie glass with a sip of milk, you get the richness andthe palate-cleanser.

Ansel, the owner of the Dominique Ansel Bakery in Downtown New York City, says the Milk & Cookie Shot will debut next Friday, March 21, at his pastry shop. He doesn’t know how many will be made available, but estimates it will be “probably a couple hundred.”

There were also Cronuts—his donut-croissant hybrid—available at the SXSW event. Ansel seemed very excited about The Cronut’s recent reception at his Los Angeles pop-up, which saw lines stretch several city blocks. But he cautions that the phenomenon, which he’s trademarked, won’t be available for mass-production anytime soon.

He’s also grown a bit wary of all The Cronut imitators out there peddling inferior products.

“When people just rip off your idea and try to make money off it, it’s not really flattering,” Ansel says, with a chuckle. “I think any respectable chef should have his own creations and do things for themselves.”

As far as the future goes, Ansel is back in the lab “working on a few things,” and is very excited about his cookbook that’s coming out in October from Simon & Shuster, which will be filled with “recipes you can make at home.”

And SXSW, he says, is the perfect venue to launch his latest mouthwatering product. “It’s a show about creativity and innovation, which is something I firmly believe in and really enjoy.”

Why not make your own, here is one I found